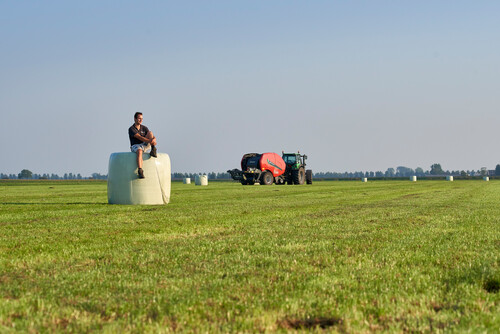 The art of round baling took a massive leap forward with the unveiling of FastBale – a revolutionary non-stop round baler wrapper combination that cleverly integrates a pre-chamber with a main chamber and a wrapper. Machine layout is truly innovative with two chambers arranged in series, allowing a number of rollers to be shared. Operating as a pre-chamber, the first section of FastBale produces two-thirds of the bale. As the pre-chamber reaches its preset density, crop flow is diverted into the main bale chamber allowing baling to continue.

FastBale truly eliminates the stop/go frustration of conventional round baling. FastBale is designed with two full roller fixed chambers. The pre-chamber is two thirds of the size of the main chamber and receives the crop flow while net is applied and the bale ejected from the main bale chamber. The large diameter feed rotor gives superb intake capacity to both bale chambers.

Complex bale transfer systems have been completely eliminated. The wrapper is lowered to receive the bale directly from the main bale chamber.

The wrap-around main frame also avoids any risk of a bale being lost over the back of the wrapper when working on sloping land, improving operational safety compared to other systems.

FastBale’s innovative wrapping system incorporates twin satellites which rotate about the vertical axis, with the bale supported on two powered rollers.        This layout substantially reduces the space required for rotation of the film, resulting in a more compact machine, faster operation and higher precision in wrapping.

FastBale has a unique method of discharging the wrapped bale. When wrapping is complete, the rear roller is lifted. This gently places the bale onto the ground, rather than rolling it off the wrapping table, greatly reducing the risk of the bale rolling away when working on sloping land.

The optional bale turner allows wrapped bales to be discharged on their end, where the increased number of film layers provides enhanced protection against damage from coarse crop stubbles or stones.

The innovative yet simple design utilises the lifting action of FastBale’s wrapper frame to turn the bale while still on the move, maintaining the non-stop capability of FastBale, with no requirement for any additional hydraulic functions.This ingenious solution is very compact – during the bale wrapping process the bale turner is stowed under the front wrapper roller, with the result that FastBale retains its class leading compact dimensions in both work and transport. A further plus point is that the bale turner does not need to be folded away manually prior to road transport. If the bale turner is not required, it can be left in place and simply locked in its parked position with the operating link disconnected, allowing bales to be discharged in the conventional manner.

FastBale has been built with maximum reliability in mind incorporates many features in increase long term durability:

FastBale provides fully automatic operation. The result is that not only is productivity significantly increased, but stress and fatigue for the operator are reduced. The only operation the operator needs to choose is whether to control the release of the wrapped bale. Elimination of stop-start operation also gives a significant reduction in wear and tear on the tractor transmission.